Pamela Vardy has been awarded the Medal of the Order of Australia (OAM) in the Australian Queen’s Birthday Honours announced today, June 21, 2021, for service to horticulture and to radio media. 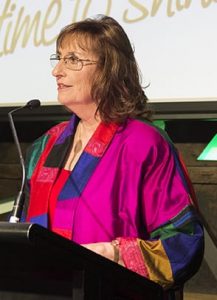 Pam joined the Horticultural Media Association Victoria Incorporated (HMAV) in August 1997, shortly after she became the regular presenter of community radio 3CR’s Sunday morning Gardening Show.
She became a member of the HMAV Executive Committee at the Annual General Meeting in 1999, and remained a member of that committee until late 2018. She served 19 years as a committee member, the last six of which she was vice-president.
Pam’s contributions to HMAV have been extensive – her willingness to take on whatever tasks were asked of her, her ability to clearly think through issues to reach successful outcomes and her management ability and dedication to ensuring the association operated efficiently and in accordance with the appropriate laws saw her become highly regarded by all HMAV members.
She was awarded Honorary Life Membership of HMAV in 2012 for her distinguished service and dedicated commitment to horticulture and the media.
Her great organisational skills resulted in HMAV holding many successful events – annual dinners and meetings, special events and the national HMA Laurel Awards presentation functions in particular. While Pam has been an active horticultural media presenter and speaker for several decades, her contributions have been entirely voluntary.
Pam’s long involvement with 3CR’s Gardening Show is extraordinary. She has recently retired from the role of principal presenter of the Sunday morning Gardening Show – so many years of very early mornings highlight her dedication to the station and the program.
Having been the show’s panel operator for many years, Pam added to her involvement by taking on the additional roles of co-ordinator and anchor presenter in 1997 when the late Allen Gilbert left the program. In all, Pam has volunteered at the station in a range of capacities for more than 40 years – a sterling effort by anyone’s standard.
Pam’s committee endeavours have not been restricted to just HMAV. For several years she was an active committee member, then chairperson, of Cultivating Community, a not-for-profit, Melbourne-based organisation that develops and supports community gardens and local food projects mainly on public housing estates.
While involved with Cultivating Community, Pam co-authored the book ‘Community Gardens’ with Penny Woodward, which was published to much acclaim in 2005.
In 2008, HMAV became a financial supporter of the Victorian Schools’ Garden Awards (VSGA), a program initiated some 47 years ago by the late Kevin Heinze and Paul Crowe under the auspices of the Victorian Department of Education.
VSGA was established to encourage Victorian schools to improve and utilise their grounds for the betterment of the students and their communities. Pam was appointed to represent HMAV on the VSGA committee in 2009. Following the resignation of its chairperson Jane Edmanson OAM, Pam was elected the chair of VSGA in 2012, which position she held until it was renamed and restructured to become the Victorian Schools’ Garden Program under NGIV’s auspices in 2016.
Pam’s longstanding commitment to HMA Victoria and Australia and her enthusiasm for bringing sound practical  gardening advice to thousands of people over the years have seen her honoured in 2021 with this well-deserved award.
Congratulations, Pam Vardy OAM, from all your HMAA colleagues and friends.