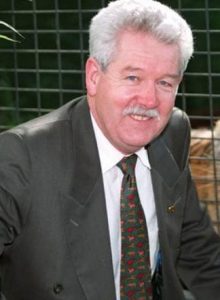 Ed McAlister was born in Northern Ireland and confesses he was not a very diligent student at high school. However, thanks to an interest fostered by his paternal grandfather, he applied for and was awarded a Scholarship to study horticulture at Greenmount Agricultural College. Following industry experience, both in England and Northern Ireland, Ed, and his wife Margaret, migrated to Sydney in February 1967 where Ed worked at Pikes Nursery at Kellyville, outside Parramatta, for two years.

As a result of a holiday in Armidale and regretting his lack of application in high school, Ed decided to apply for a position as a Laboratory Assistant in the Botany Department of the University of New England, commencing there in February 1969, at the princely sum of $56.26 per week! Enrolling for a degree course as a part-time student in 1970, he eventually graduated in April 1977, with a Bachelor of Science degree majoring in Botany and Ecology.

In 1979 Ed accepted the position of Horticultural Botanist with the Botanic Gardens of Adelaide, a position that put him in charge of the Technical Section and made him responsible for checking the identification of all plants within the three Botanic Gardens. He held this position until May 1981 when he was appointed as Assistant Director. He feels that the two most memorable achievements he had while working in the Gardens were, firstly, being given the task of overseeing the reconstruction of Mount Lofty Botanic Garden after the devastating fires of 1983 and, secondly, being appointed as the Gardens’ representative on the team building the Bicentennial Conservatory.

In July 1991 Ed surprised everyone, including himself, by accepting the position of Chief Executive for the Royal Zoological Society of South Australia, a position he held until January 2006. When asked what he felt were his major achievements in that position he stated that being responsible for the ‘greening of Adelaide Zoo, opening Monarto Zoological Park to the public, increasing the conservation role of the Society and having a happy staff would rank very highly’. He also felt that for a botanist to eventually become President of the World Association of Zoos and Aquariums was an honour he could never have imagined.

In 2003 Ed was made an Officer in the Order of Australia (AO) for services to conservation. In 2006 he was awarded an Honorary Doctorate by the University of Adelaide and in 2009 was awarded the status of Distinguished Alumnus of the University of New England. He was President of the Australian Institute of Horticulture for three years. He has been involved with the Friends of the Botanic Gardens of Adelaide for almost 43 years and in November was appointed to the role of President, taking over from Merilyn Kutchel. He has also edited the Friends’ newsletter for 14 years.