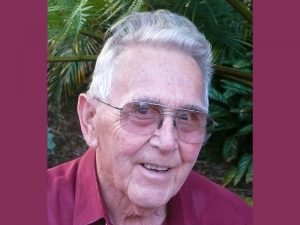 The recent passing of Gerry Zwart was greeted with great sadness by members of the Horticultural Media Association Queensland (HMAQ) and the wider community.

Gerry passed away in hospital on the evening of the 6th October after a fall at home. Valerie Zwart, his wife of 68 years, was by his side. He was 92 years of age.

Originally residents of South Australia, he and Valerie moved to the Mapleton region of Queensland in 1989. They immediately became active volunteers in the community and were long term members of the Mapleton and District Community Association. Gerry served as president of the Association. The fund-raising efforts of Gerry and Valerie for the community are legendary. Gerry was awarded an Order of Australia (OAM) in 2015 for his achievements and service to the community.

Gerry joined HMAQ in 1996 as an inaugural member. He served as Executive Committee member for more than six years and took on the role of President in 2002 and 2003. Gerry and Valerie judged shows, events and garden competitions and contributed a horticultural column to the Sunshine Coast Daily for many years. In pre-COVID times, the couple gave their time, energy and wise horticultural counsel to fellow gardening enthusiasts by volunteering at the plant clinic on each and every day of the Qld Garden Expo. Both he and Valerie were awarded Life Membership as acknowledgment of their contribution to HMAQ.

Gerry was born in Holland and was one of twelve children. In September 2019, the Ambassador of Israel presented Gerry with the Righteous Among the Nations Award to honour the lives of his parents Marinus and Marie Josepha (Huetink) Zwart. The Righteous Among the Nations are non-Jewish individuals who have been honored by Yad Vashem, Israel’s Holocaust memorial, for risking their lives to aid Jews during the Holocaust. This is the highest honour given by the Israeli Government to individuals outside of Israel (www.yadvashem.org)

Gerry’s family saved at least five children. Bela van Praagh was three years of age when she was rescued and hidden. Gerry was a young boy at the time. Bela asked her son, Lex Menco, to search for Gerry. It was Gerry’s involvement in HMAQ that allowed Bela’s son to locate Gerry. During the ceremony, Gerry and Bela (by video from Israel) shared recollections of their war years together as ‘pretend’ siblings. Several HMAQ members attended this moving event.

Gerry made the most of life. He and Valerie attended a HMAQ event at Redlands Nursery on Saturday 2nd October. Members who present at the event consider themselves very fortunate to have been able to speak and spend time with Gerry on the day. The following day he and Valerie entertained a gathering of friends at their retirement village to celebrate their 68th wedding anniversary.

Gerry had a quick wit and wonderful sense of humour. He was gentle, kind and generous with his time and knowledge. He will be sadly missed.

On behalf of HMAQ members