More in Articles from the Web: 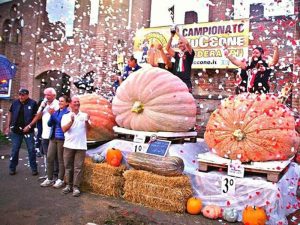 An Italian grower has set the bar high with a new record for the world’s heaviest pumpkin – ‘zucca gigante’.

The pumpkin weighed in at 1226kg beating the previous record of 1190.5kg held for five years by Belgian, Mathias Willemijns.

It was grown by Stefano Cutup and awarded during the National championship of giant pumpkins held in Pontedera (Pisa) by Associazione Lo Zuccone.

There were 12 contestants vying for the top weight.

The Australian record is held by Dale Oliver, a gardener from Knockrow near Ballina, with a 876kg pumpkin.

For more of the Italian event see the report in HortDaily at https://www.hortidaily.com/article/9359456/the-largest-pumpkin-in-the-world-comes-from-italy-and-weighs-over-1200-kg/.