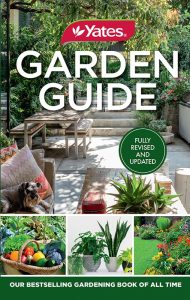 There’d hardly be a gardening household in Australia that doesn’t have a copy of the Yates Garden Guidesomewhere on a bookshelf. Australia’s best-selling gardening book, it is also one breaking records for longevity.

The Yates Garden Guide was first published in 1895 and has been in print ever since. The 45th Australian edition has just been released (Harper Collins, 2021, rrp $35). Each edition has been revised and updated to meet contemporary gardening trends, ideas and products.

I have 10 copies of this venerable guide including one from New Zealand. The earliest in my collection dates back to 1947. It features as a frontispiece, photos of Yates’ Derwent Valley farm where seed is being harvested from crops of snapdragons and Crego asters. In the introduction to this early edition it is noted that 600,000 copies of the book have been sold since that first edition. Today Yates estimates the number has gone over seven million.

The story behind the origins of the Yates Garden Guide is fascinating. The Yates seed business was originally established in Australia as a branch of a family grocery and seed business that started in 1826 in Manchester in the UK.

Arthur Yates was asthmatic and the second son. As was a common practice in the19th century, he was sent to the colonies – initially to New Zealand. It was Arthur who wrote the first Yates Garden Guide.

I didn’t set out to collect copies of the Yates Garden Guide but they have come my way from gardeners who have been keen to pass their much-loved copy on to someone who will care for it.

As I am looking through my collection, which includes some very battered books, a note flutters out from one saying Sylvia H. gave it too me. She apologises for its battered condition saying: “it was used a lot”. Her inscription inside says it was her first garden book. It is the 28th edition, which came out sometime in the 1960s by which time two million copies had been sold. Sylvia was a volunteer who helped look after plants at the SAN, the Seventh Day Adventist Hospital in Sydney.

This latest edition has information on backyard chooks, bringing birds and insects to the garden, an expanded list of environmental weeds and extra information about pests and diseases and indoor plants. Yates horticulturist and HMAA member Angie Thomas has edited the 2021 edition.
“All the product recommendations have been updated, which includes adding more organic options,” says Angie from her lockdown home office in Sydney. “There is also additional or significantly updated problem-solving tables for some of the most popular home grown plants, such as citrus and tomatoes.
“New pests have also been included, as Australia faces increasing pressure from pests not previously found here.”
As is the trend with the new editions of the Guide, this one mirrors current gardening trends. Angie says indoor plant information has been expanded, reflecting the continued (and still growing) passion for indoor plants with additional information about edible plants for pots (perfect for the increasing number of small gardens).
Although it has been estimated that some seven million copies have been sold since that first edition 135 years ago, Angie is sure there’s a new generation of gardeners who’ll appreciate the depth of gardening information contained in the Yates Garden Guide.

Contact Caitlin Toohey if you’d like a copy of the new Yates Garden Guide or to arrange an interview with Angie Thomas.