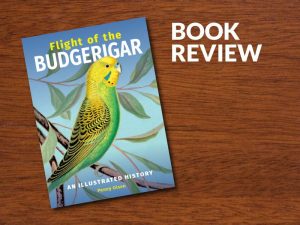 … such is the story of a little Australian bird which left Australia unhonored and unsung to return years afterwards to the land of its origin decked out in a coat of many colours and world famous.

The humble budgie is perhaps one of Australia’s best known and most widespread exports. It came to the attention of the English ornithologist John Gould (how many of you were members of the Gould League during primary school days?) following a breeding boom in the 1830s. He was at that time collecting material for his best-known work The Birds of Australia and when he returned to the UK in 1840, he took with him one breeding pair of budgerigars.

Author Penny Olsen says in her introduction: ‘In the 1920s and 1930s, the cult of the Budgerigar took flight. There were societies, exhibitions and standards of perfection. War intervened, with dire consequences for domesticated budgies, but within a few decades the Budgerigar was Europe’s most popular cagebird, before conquering the United States, Japan and beyond.’

Populations of budgerigars in the wild have fluctuated wildly over the years, governed in large part by floods and droughts. When central Australia has an abundance of water and therefore food for wild birds, budgies abound in vast clouds so dense they almost block out the sun. Sadly they readily fall victim to droughts – their numbers fall as quickly as available food resources disappear.

Penny Olsen is an Honorary professor in the Division of Ecology, Evolution and Genetics at The Australian National University. Following a career as a field biologist, she has now turned her attention to writing books about Australian natural history and those who have recorded it over the years, including artists and scientists. She has had more than 25 books to her name thus far,

The relevance of The Flight of the Budgerigar to the gardening media may seem to draw a long bow but it is completely relevant when one considers how this small member of the parrot family and its many relatives play such vital roles in the continuing propagation and regeneration of Australian flora. Without them spreading seeds, so many of our desert plants may well be extinct by now.

The book is beautifully illustrated with both magnificent colour photographs as well as scientifically accurate and beautifully executed ornithological artworks.

Well researched and covering the history of our world famous budgie, the book provides a comprehensive insight into this bird, its survival mechanisms in the wild and how it managed to conquer the world. An interesting read and an insight into a branch of Australiana many of us would not be all that familiar with.