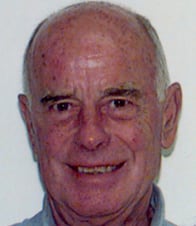 It is with much sadness that we record the passing of Graeme Purdy, a foundation member of HMA Victoria, at the age of 89 in early July, 2021.
Graeme was well known throughout the gardening media world as the editor of the monthly Your Garden magazine for many years in the 1970s and ’80s. Many HMAA members have written for that illustrious publication at some time or other before it ceased production in 2016.
After he left Your Garden, Graeme took on a part-time role with the Nursery and Garden Industry Victoria as editor of its member newsletter (which became Groundswell magazine) and the ‘voice’ of MIFGS and Trade Day, doing all the PA announcements at both.
A lover of all things garden-related, Graeme was a voluntary guide with the Royal Botanic Gardens, Melbourne for many years. Dividing his time between his family home in Melbourne and a rural retreat at Warburton in the Yarra Ranges, Graeme found time in retirement to write and edit various local publications in the Ranges and was also engaged by PGA in a communications role to produce media releases.
Graeme was a regular attendee at Yates’ annual new release lunches over many decades, who will be missed by his many friends and colleagues around Australia in the horticultural media and nursery industries.