Presented by the Australian Museum and Royal Botanic Garden Sydney 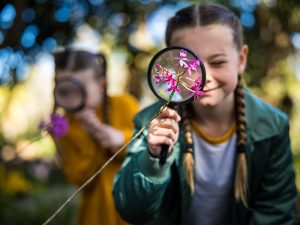 Sydney, 13 August 2021: Science will be under the microscope when the Sydney Science Trail opens today with a world class line-up of events and scientists celebrating the power of science, and the power of connecting through science.

One of the nation’s largest free, online science events, the Sydney Science Trail is hosted by the Australian Museum and the Royal Botanic Garden Sydney as part of National Science Week, from 13 August – 13 September, 2021.

Now in its second year, Sydney Science Trail showcases the role science plays in shaping our lives – especially during the COVID-19 outbreak, which has seen the event move online again. The 2021 theme is Food: Different by Design, which aligns with the United Nations International Year of Fruits and Vegetables

The packed online program features something for everyone including inspiring virtual talks with leading scientists, on-demand activities such as plant and soil regeneration, design competitions, virtual tours, films, quizzes, interactive games, at home science and more.

Sydney Science Trail is a partnership of the Australian Museum and the Royal Botanic Garden Sydney, supported by funding from ANSTO, Inspiring Australia NSW as part of National Science Week, University of Technology Sydney, Macquarie University and City of Sydney.

About the Australian Museum

The Australian Museum (AM) was founded in 1827 and is the nation’s first museum. It is internationally recognised as a natural science and culture institution focused on Australia and the Pacific. The AM’s mission is to ignite wonder, inspire debate and drive change. The AM’s vision is to be a leading voice for the richness of life, the Earth and culture in Australia and the Pacific. The AM commits to transforming the conversation around climate change, the environment and wildlife conservation; to being a strong advocate for First Nations cultures; and to continuing to develop world-leading science, collections, exhibitions and education programs. With more than 21.9 million objects and specimens and the Australian Museum Research Institute (AMRI), the AM is not only a dynamic source of reliable scientific information on some of the most pressing environmental and social challenges facing our region, but also an important site of cultural exchange and learning.

About the Royal Botanic Garden Sydney

The Royal Botanic Garden Sydney is Australia’s oldest living scientific institution, beginning its life in 1816. The Garden encompasses 30 hectares and is the oldest botanic garden in Australia, home to an outstanding collection of more than 27,000 plants from around the world. The Garden is also a part of the Australian Institute of Botanical Science. The Institute consists of the physical and virtual scientific collections, research, services, and facilities, and of course, staff at the Royal Botanic Garden Sydney, Australian Botanic Garden Mount Annan, and the Blue Mountains Botanic Garden Mount Tomah. The Institute is one of the nation’s premier botanical research organisations and helps to ensure the survival of plants and build more resilient ecosystems for future generations.