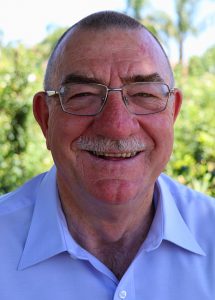 The rose has been revered by poets, artists, sculptors, writers and gardeners for centuries even long before Shakespeare penned those lines “A rose by any other name would smell as sweet” in his tragic play, Romeo and Juliet.

In South Australia, the name Trimper is strongly associated with roses. Kelvin Trimper AM grew up with roses and has spent a lifetime enjoying their beauty. He was born and raised in Renmark in the Riverland region of South Australia well known to gardeners as the home of the late David Ruston OAM.

Kelvin says when he was 11 years old he helped bud the first 6000 roses in David Ruston’s garden. “I could never have imagined that one day I would become President of the World Federation of Rose Societies; it was a huge honour.”

For Kelvin and his wife of 32 years Melanie, roses remain a big part of their lives. Their garden is filled with more than 2000 roses and their lives revolve around growing and exhibiting roses.

“I’ve always loved plants and I enjoy growing all types but particularly roses,” admits Kelvin. “The rose is the most popular flower in the world so it’s logical those of us who grow, show, hybridise and use roses in floral arrangements, develop a deep and true passion for roses.”

Apart from propagating, growing and exhibiting roses, Kelvin has gained great enjoyment from his life-long friendships with other rosarians – locally, nationally and internationally. Kelvin’s deep affection for this flower reflects the many qualities of the rose including its numerous varieties, diverse colours and blends, long flowering phase of at least nine months and wide range of uses.

“Roses symbolise friendship, love and peace and are integral to our culture,” he explains. “They can be grown on trellises, fences or as pillars; miniature roses are great for small gardens and pots and new varieties are introduced every year.”

For this well- known and highly respected rosarian, who has more than five decades of gardening and rose growing experience, one of his most triumphant achievements must surely have been his election as President of the World Federation of Rose Societies in 2015. He has also served as President of both the National Rose Society of Australia and the Rose Society of South Australia.

He has received many awards. In addition to the Australian Rose Award in 2013 he received the T.A. Stewart Memorial Award. In 2018, Kelvin was appointed a Member of the Order of Australia for his leadership qualities and extraordinary contribution to property development and horticulture.

Kelvin has lectured at international rose conventions on nine occasions and is a regular guest on radio as well as being the author of dozens of articles on roses.

Despite Kelvin’s busy involvement in the world of roses, he still finds time to grow an amazing fruit and vegetable garden at his property north of Adelaide. His enthusiasm, love of nature and the environment shines through clearly as he and Melanie, enjoy eating, growing, preserving and sharing their produce.

Kelvin and Melanie are a perfect example of a couple who share the love of a hobby – one that has taken them to rose gardens around the world. To this day their joy and professionalism shines through, even as they prepare for small local rose shows. With Melanie’s exquisite talent for presenting roses in flower arrangements, you can be assured that they have received numerous trophies for both growing and showing. These awards stand proudly in their trophy cabinet.

They are both looking forward to later this year when the National Rose Society of Australia will host the World Rose Convention in Adelaide from October 27 to November 3. The convention will be supported by Australia’s five state rose societies, the government of South Australia, the Adelaide City Council and the Adelaide Convention Bureau. An exciting feature of the Convention is a large-scale public exhibition that will bring together an indoor rose and green-life showcase that will incorporate the Australian Rose Championships, trade booths and floral displays.

“It will be an exciting time and a very special occasion for us to honour the world’s greatest flower,” Kelvin concludes.